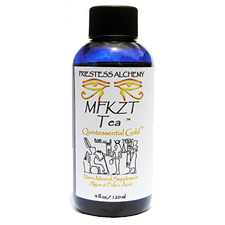 Extract from native algae growing in water soluble ORME elements mainly Rhodium, Gold and Palladium with Iridium as minor tenor. MFKZT is the ancient Egyptians name for the material fed to the Pharaoh for Longevity and Dominion. 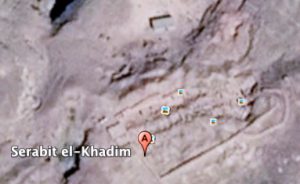 The  Temple of Hathor at the summit of Serabit el Khadim (better known as Mt. Horeb) for 1500 years was where the High Priests and Priestesses made a substance for the exclusive use of the Pharoahs.  Shown in the stella is the Goddess Hathor (center) administering to the Pharoah.The Treasurer is holding the cone of Gold. MFKZT (moof KOOZ tea), is the Ancient Egyptian word for it; also the ‘mantra’ to guide the experience and activate it.
Note the object the Pharoah is receiving from Hathor; look even slightly familiar? A few of our intrepid experimenters have tried this method on the raw algae and have confirmed our suspicions: inhalation is the quickest most effective method to get the organic Rhodium and Gold ORME into the brain.

This is NOT an ORMUS type product. Rather it is based on the original ORME road discovery, see /Introview/ORME

“Calmness-Peacefullness, a contentment free of the concerns of life as being intrusive. Granted, the concerns of life will always will be the factors of our human lives. When one can contemplate “Life”- as it is-with a quiet Zen mind-the doings of life are more logically-effectively and efficiently accomplished. With the use of MFKZT Tea, I have found my my mind’s factors to be flowing as clear water.” Master EK

“yeah your package just got here so I opened it and tried 2.5 ml of the new stuff v4.0 and dang it was like a firecracker went off in my brain in a non destructive sort of way….Whammo! Nice! This is the best one yet. I agree. You can quote me. A quickening in the brain. Sudden spike like you had described with coke where it spikes your alertness and your heartrate for a bit before calming back down into a nice pleasing experience. Kind of like a tiny lightning bolt struck the middle of your forehead and then you have a really quick agile mind.
No I don’t get any mystical stuff going on, this is pure brain fuel/nootropic. Other than the enhanced color perception of brightness and contrast, I can’t say this is even psychoactive. It makes me immediately desire to clean sometimes after taking it. It causes me to have BRILLIANT ideas one after another. I really love its brain-food/nootropic capacity.”  Vulcan in HI

“I wanted to share again a little miracle your MFKTZ tea brought me yesterday. I woke up with a stiff neck and was feeling sore all over and super sluggish. I could feel my neck starting to go into the pinched nerve feeling, which a common happening after such a night of sleep. This time I decided to work past it, after a little meditation and stretching, it felt a little better, but I was heavy still and starting to feel the knot tighten and the sharp pain from the swollen nerve. So I took a tsp or so of your MFKTZ tea, chanting ohm and ohm nama shiva, and within 30 seconds my body stiffness lifted, and my neck pain dissipated. Within a minute or so I could twist my next back a forth without any sharp or dull neck pain. Quite incredible really. I’ve never taken anything, besides recreational drugs, where my body aligned instantly and bodily pain dissappeared.Thanks again for sharing your discoveries with us and I would like to order 2 more” Ryan

Now go back and

look at the pipe in the stella above: “Hours have passed since I had that bowl. I am still flying. I feel like i have taken the perfect drug. This is beyond amazing. Its a very functional “inspiration/creativity” sativa like if i had to compare it but I have taken a lot of things over the years and nothing I have ever had made me say…”This is better than pot”….but this algae IS. Instead of leaving me relaxed and forcibly calmed, this stuff made me to all the laundry, dishes, organize the kitchen, water all my plants and clean the counters….in 10 minutes. I have never felt this productive. THIS IS AMAZING. 3 hours? Its also stronger than pot by the gram!  Just pure clarity of mind. It lasted for 4.5 hours then faded a bit but is still quite present.   But yeah 10/g seems a good initial price, but its high is easily worth 15/g. If you wanted to be mean but make a Mercedes 20/g would be more appropriete for those getting 1 gram or less portions. Past 2 grams should be 15/g” Vulcan in HI     Willing researchers please email request to priestess@priestessalchemy.com

Don’t be confused by the bottle label since I needed to call it a Humic/Fulvic Acid to get it through Customs. Otherwise it gets held up for weeks while they try to figure out what it is.

This story starts about 10 years ago when a ‘white-gold’ researcher, Bill Alford, had traveled to Serabit el-Khadim and emailed me the pics he had taken of the Temple of Hathor site; where the supposedly monatomic Gold and Rhodium had been prepared as the edible MFKZT brain food for the Homo Capensis Pharaohs and High Priests for 1200 years.
I had just setup a new Epson photo printer and printed out the pics, then spread them on a coffee table. Simultaneously, I had been drying my ‘white-gold’ extract product, (I don’t like to use that ORMUS term since it isn’t critically defined) had ground it up in a mortar and just set it down on the coffee table next to the pics. It was a revelatory ‘Ah ha’ moment when I realized that the color match between pics of the Serabit sandstone and my ‘white-gold’ was 100%. It was at that point that I understood that the naturally occurring ORMEs are in the sandstone Silica and this is where to begin the harvesting. see Orme Road story OrmeRoad
Bill had written in the email that he found large tanks cut into the Mt Serabit sandstone and had surmised that they had been growing algae in the waters that leached through the sandstone. That sandstone looks just like the pic, shown above, of the dried algae that I harvested this Spring after the flood waters it was growing in at the mine had receded. The water soluble ‘monatomics’ are in the sandstone at Mt. Serabit and in the sandstone at the mine; not all that far from Orme Road in AZ. So why go through elaborate procedures to create synthetic ORME or precipitate some alleged ORMUS when Mother Nature has already worked it all out? The algae just gobble it up out of the water and store it for you. Prior to the algae discovery at the mine, I had been performing the lab work on water soluble Rhodium for the PhD metallurgist ‘Doc’, that had taken David Hudson’s naturally occurring ORME to the Soviet Academy of Sciences for the ‘long burn’ spectrographic analysis. Guided all the way through the collection and analysis of the soluble Rhodium, I applied those same procedures to the algae. Sure enough, the algae extract actually performed even better than the ore Doc had sent me to work on. Converting that ‘monatomic’/ORME state to a recoverable metallic state can be accomplished with a variety of methods but the simplest and easiest was to electroplate it on to Titanium cathode where the Rhodium and Gold is easily quantified and identified. The single atom Rhodium or Gold is held by water molecule clusters that have a balanced charge so there is no ionic or covalent bonding going on. It truly is ‘monatomic’.

Unfortunately, many people have mistakenly used the name MFKZT applied to salt or saltwater ORMUS precipitates. There was no salt on Mt. Serabit and the closest seawater was about 90 miles away across the Sinai desert; so that assumption doesn’t compute at all.
Other people have applied the name MFKZT to the so called M3 or M5 products; from a Sodium burn formula given by an old miner metallurgist called The Essene. This process is assumed to be a short step toward the Hudson synthetic ORME. NOT! And how would those ancient Egyptians on Mt. Serabit have acquired or stored metallic Sodium that will autoignite in air???? OOPS that one doesn’t work either.

There are no reviews yet.

Only logged in customers who have purchased this product may leave a review.